The Injune Race Track becomes a social gathering, with horses and fashions and all that is part of the country racing calendar for an entire weekend every year at the running of the Santos GLNG Injune Cup. Local residents and visitors from across the region turn out to the races to enjoy the festivities, which were proudly supported by Santos GLNG. The occasion includes festivities for people of all ages, especially children, as a jumping castle and merry-go-round are provided. A live band is part of the annual set-up as well, so that the younger adults too, are catered to.

The Santos GLNG Injune Cup is an Open Handicap horse race over 1400m. The total prize money is some $12 000. Racing Queensland has recently developed minimum standards for registered Queensland non-TAB race clubs and allocated the Injune Race Club $19 220 to ensure running rails, swab stalls, saddling enclosures, barrier stalls and jockeys rooms were up to standard. The Injune Race Club has consequently ensured that the track has met the standards required and feel that these improvements enhance the racing experience of both punters and visitors.

Large crowds are drawn to the annual running of the Injune Cup. The Injune Cup Day features a total of five races with combined prize money of some $40 000. The event takes place at the historic Injune racecourse, and is accompanied by a full days’ events.

The Town of Injune

Injune, itself , is a small town in South West Queensland, Australia. The town is located on the Carnarvon Highway, 92 kilometres north of the regional centre of Roma. At the 2006 census, Injune had a population of 362. It was formerly a hub for cattle and dairy industries, but now serves as a staging point for expeditions to the nearby Carnarvon National Park. More recently, natural gas and timber have served as the major primary industries.

Horse races were amongst the first organised sporting events in Australia and served as both a recreation and for the furtherance of horse breeding. This was important in an era when horses were used for transport, industry and warfare as well as for recreation. 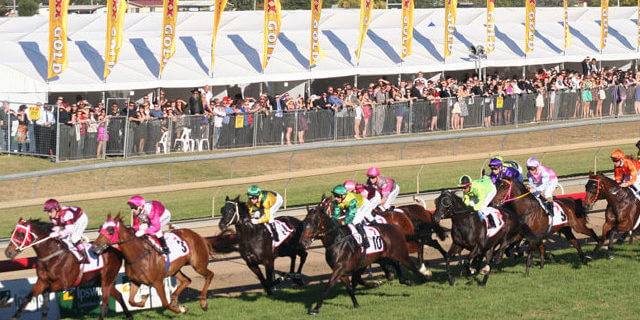 Horseracing, and in particular country horse racing in Australia has become so much more than just an equestrian event; it is now a complete social occasion, resplendent with celebrity attendance, haute couture exhibitions, and significant prize money. It is not only at Injune, and the event of the Injune Cup Day that the country racing scene has become a social occurrence, but all over Australia these races are proving popular.

Internet access is spreading, and more of these races are becoming accessible all the time. Huge amounts are wagered on the horse races in Australia, and modern sports books grant everyone access to this world, a world of wins, places, and trifectas, where the prospect of financial rewards is just a click away. Nevertheless, the Injune Racecourse, and indeed, the Injune Cup Day as well, are important for their social value not only to Jockey Club members, trainers, owners and jockeys, but also for generations of race goers from all walks of life, both in the surrounding area and from further afield.